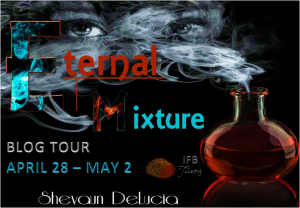 If you had the chance to start your life over, would you take it? If you were told you would live for eternity, would you embrace it? If a stranger told you he was your soul mate, would you believe it?
Raina Richmond has played it safe her entire life. She has never broken the rules. That is, until Brent Alexander walked straight into her life, causing havoc. Turning her world upside down.
Brent is the new kid in town. He is every girl’s fantasy: adorable, charming, chiseled, and the typical boy Raina usually steers clear of. But there is just something about him she can’t seem to resist. Safe is no longer an option for her. For him, she breaks all the rules.
What she doesn’t realize is that he holds the key to her past, present, and future. Once he reveals the reasons behind their irrevocable connection, she will unlock the answers to all of her questions, and her life as she knows it will never be the same again.

Soul mates—this is a heavy topic for me. To me, finding your soul mate is like finding the holy grail of love and relationships. It is something that I feel should never be taken lightly.

I am a true believer that soul mates do exist! I guess you can say I’m more of an idealist, an escapist into the realms of magical possibilities. The idea of soul mates is exciting, thrilling, and scary all in one. My thought is once you’re connected to your true other half, you’re bound for all eternity, through life and death. But what happens if you never find your soul mate? Is just loving someone enough for the rest of your life? Absolutely!

I do believe it’s a rare moment when one finds their other half. I mean, look at how many people live in this world! Whether or not there is only one soul mate per person is something that I question as well. I would like to think that is the case. I would also love to believe that when you do find your other half, bells and whistles go off too! Lol. Okay, that was a joke. But seriously, how does one know?

For some it’s a mere moment, and poof, they know. For others, it’s time; perfecting a masterpiece takes patience and dedication. And of course there are the hardheads who choose not to see or believe that the person in front of them may very well be their soul mate until they’ve lost them. What is that little saying? Oh yes, if you love something, let it go. If it comes back to you, it’s yours forever. If it doesn’t, then it was never meant to be.

For Brent and Raina, it was a mere touch that sent them into overload. It was a bolt of electricity rushing through their bodies, scorching them to the bone. Every contact was a reminder that something monumental was happening between them. Raina felt every bit of it. She began as a realist, not really wanting to believe in all this mumbo jumbo stuff; that is, until Brent came along.

“Our souls are bonded together for eternity. You are my eternal soul mate and I am yours. This is why we have such a magnetic connection. This is why your body reacts to me in the way it does.” ~Brent

Still, Raina did not want to believe in the possibilities of Brent being her soul mate. If she did, then her path was already chosen for her, which meant the choice was no longer hers, and that scared her to death. Brent opened her mind. He opened her eyes to the idea that soul mates are possible. Their love for each other made her a believer. Eventually there’s no need to speak on it; fate just speaks for itself.

Shevaun DeLucia lives in upstate New York with her husband, four children, and two dogs. As a stay-at-home mom while her children were young, she fell in love with reading. She indulged in the small moments that took her away from the reality of her loud, overly rambunctious household, bringing her into a world of fantasy. When reading wasn’t enough to satisfy her, she turned to writing, determined to create the perfect ending of her own.
Shevaun’s Website | Twitter