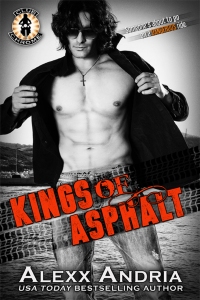 Ok, so I think I can count on one hand how many Biker books I’ve read. I don’t know much about the biker world but I know what I like and what I don’t like.

The main characters: Zoe is a plus size woman who hasn’t had much experience in sexual matters. Zoe’s career is not as fulfilling as she would like it to be so she take it upon herself to root out a story that everyone seems to be turning a blind eye to.
Jax and Hunter are the dangerous and hot leaders of a bike gang called the Kings of Asphalt. They meet Zoe when she blags her way in to see them.

To be honest, I really didn’t get into the story, but that’s not to say I disliked it. It was okay. It holds a lot of promise but I do think with some more work, it could be developed into a really great story.

The supense: There wasn’t a whole lot of suspense. There’s not many characters introduced so figuring out who the bad guy was didn’t take a huge amount of effort. This should have been a huge focus point in the story because it’s what Zoe was looking into but for me, it just fell flat.

Overall: Good baseline story but needs work to make it a great story. Felt rushed in the suspense side of things. The writing style was easy to follow and the characters weren’t hard to understand. It was also a refreshing change to see a character who wasn’t just curvy, but was a plus size. There’s not many books out there that use characters like that.

Rating: 3 Shamrocks from me BUT it hasn’t put me off reading more from the author because I do think she shows a lot of promise.

One thought on “Book Review: ‘Kings Of Asphalt’ by Alexx Andria”