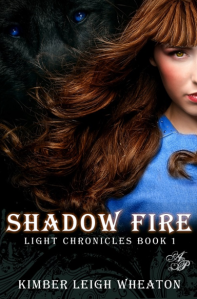 ‘Shadow Fire’ is the first book in a new series from Kimber Leigh Wheaton. It’s target audience is YA and I would recommend it to anyone that likes the YA genre.

Every five years a girl aged between 14-18 is chosen to be sent on a dangerous quest to recover the Goddess Statue. So far, none of the Chosen have been successful. Now, the time has come for someone to undertake the quest once again.
17 year old Ashlyn has had the unfortunate luck of being the Chosen. She sets off with her two companions, Zane and Shadow. Another companion, Freya, later joins this little crew.

The Companions: Zane, Shadow & Freya:
Zane is the good looking mercenary that joins Ashlyn to protect her as she undertakes the quest that has been offloaded onto her.
Shadow has been Ashlyn’s friend ever since he was a small cub. He’s extremely intelligent and understands pretty much everything that’s asked of him.
Freya, is, well, you’ll meet Freya for yourself when you read the book 😀

I quite enjoyed Ashlyn’s feisty character but I enjoyed it even more because she wasn’t painted as just a Kick Ass Heroine. Her vulnerable side also gets to be seen which, in my opinion, makes her character more believable.

The story is quite a good one and introduces scenarios and characters that both help and hinder Ashlyn and her companions as they make their way to the Breven Ruins. It also has a few little twists that were enjoyable.
I did find the last major fight scene a bit of a disappointment, I was expecting a little more action.