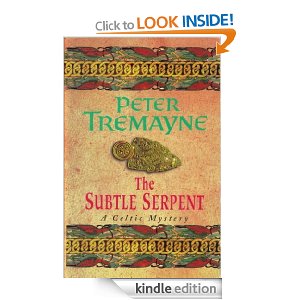 This is the first book by Peter Tremayne that I have read.

I came across these books in a little “shop” on the grounds of Scotney Castle and upon seeing they were Celtic mysteries, I bought 4 of the books. I don’t regret my purchase.

Sister Fidelma is a well educated Celtic religieuse (I took this to mean nun) who also bears the title of anruth and is advocate of the Brehon law courts. She travels where she is needed to try and solve crimes. I like Fidelma of Cashel as she is also called. She is a strong minded woman and tends to be logical in her decisions and actions. She does however show that she too can be prone to illogical thoughts, like anyone else.

This story find her travelling to an abbey to solve a mysterious murder of a young woman whose identity is not immediately known. On her journey to the abbey, Fidelma and Ross (the guy in charge of getting her to the abbey) stumble across another mystery, one that shows itself to be more personal to Fidelma than the murder.

Full of he said she said accusations, another murder, mysterious noises from below the abbey and conspiracies, The Subtle Serpent is well written. Even the Latin phrases that I did not understand and are used by the religieuse in the story did not stop me from enjoying this book.

Learning different facets of the laws from back then was intriguing, as was finding out that different religious laws were trying to take over from the ones that Fidelma believed in. Things like that fascinate me and reading about them in this aspect was thoroughly enjoyable.

I have three more books from this series to read and I shall be looking to purchase the rest when I can.